All nature. Nothing added.

The tea leaves picked during the new tea season are stored at a winery in Nagano prefecture in JAPAN located at an altitude of 860m.  There, they let it sit for about six months in the optimum temperature and humidity for ageing.

Careful roasting and finishing by a tea master maximises the taste of the aged tea.

The aged tea leaves are enriched in umami and have a thick taste and the mouthfeel is soft as the gentle taste spreads.

Enjoy our tea that has changed to a mellow taste in the temperature and humidity that are optimal for wine ageing!

The processing of Fukamushicha (深蒸し茶) is the same as for Sencha (煎茶), except that for Fukamushicha, the leaves are steamed two or three times longer. As a result, the leaves become withered, and the colour is also darker. However, the taste remains just as "sweet" and moderate, and the fragrance is richer and deeper. Despite the stronger aroma, Fukamushicha is gentle on the stomach, and you can drink as many cups as you wish.

The process called "Steaming" is performed immediately after the tea leaves are harvested. This is an important process that affect the taste of tea.

FUKAMUSHI (deep-steamed) is deeply steamed Sencha (for about 60 to 180 seconds).

As result of a longer steaming time, the astringency and bitterness will disappear and the sweetness and umami can be brought out. The deeply steamed tea leaves are finer, so the ingredients are easier to extract. Therefore, the colour of the tea tends to be deep-green, and the nutrients contained in the tea leaves are more concentrated.

NAKAMUSHI (medium-steamed) is called "ordinary steamed tea" or "standard steamed tea," it is a tea with a very general steaming time. The steaming time is about 30 to 60 seconds, and you can taste the refreshing astringency of the tea.

ASAMUSHI (lightly steamed) is Sencha that is lightly steamed (for about 10 to 30 seconds).  Asamushicha used to be the mainstream because it has a strong aroma. Due to the short steaming time, the tea leaves are hard and well-shaped. The colour of tea is sometimes described as yellow or gold.

How to brew Fukamushi sencha

Placed an order, very quick delivery, great communication and service 😌 Love the tea, great flavors, my favourite is Deep Steamed Green aged in Wine Cella 👌 I am from Japan, the taste is authentic, elegant, and rich, very beautiful . Personally love it, was looking for tea to serve my clients in my beauty salon, and this is loved by my customers, so good. If your looking for a quality product, great flavour and beautiful experience, this is a perfect tea selection.

Y
Yoko
So delicious i ate the tea leaves 😍

It was so beautiful fresh colur green, the smell and taste so delicious that i didnt want to waste any of tea leave... end up eating them sll when finish each up. Definatly my alternative from my morning coffee! So recommended!

I really enjoyed this tea from aroma to last sip.
It’s reminds me afternoon tea time with my grandma in Japan.
Definitely I will buy this high quality green tea again;) 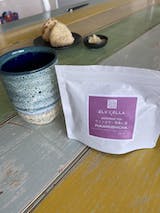